Daymond John Interviews Ryan Deiss on “The Power of Broke”

“It takes money to make money.”

Does it?  Or is there power in desperation?  In hunger?  In being broke? 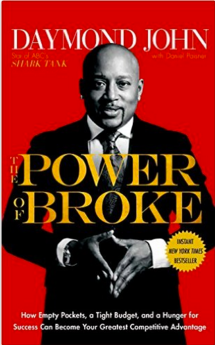 Daymond John (multi-millionaire investor from ABC’s Shark Tank) answers those questions (and more) in his new book, The Power of Broke.

The book includes stories from 14 successful entrepreneurs including…

In Chapter 5, you’ll get the raw (and often personal) story of how Ryan found himself in a $250,000 hole and how he ultimately triumphed by “getting back to zero.”

(NOTE: Be on the lookout below this video for some great quotes to tweet from the interview)

Learn more about The Power of Broke on Amazon

Ryan Deiss: “Money makes you stupid if you don’t have rules in place.”

Ryan Deiss: “When you don’t have the money… you focus on the opportunities.”

Ryan Deiss: “Even when you’re successful, that ‘kernel of broke’ keeps you grounded.”

Daymond John: “You don’t need money to make money. Money can be a superficial high.”

Russ Henneberry is a digital marketer, speaker, and co-author of Digital Marketing for Dummies. Russ has helped hundreds of brands increase sales, leads, and retention including Crazy Egg, Salesforce.com, and DigitalMarketer. Visit Russ's website or connect with him on LinkedIn.

Yes, You Can Be A Fractional CMO...Here's How