Fact: Most AdWords advertisers are paying for the wrong clicks.

They’ve picked the wrong keywords and are spending the majority of their budgets paying for clicks that never convert.

However, if you can figure out which keywords are driving revenue, you can stop wasting money on the wrong keywords and focus your budget on what’s working.

At Disruptive Advertising, we use this 4-Step AdWords Audit for all our clients. We use it to drill into…

Recently we audited a client’s account and discovered that 99% of their keywords weren’t producing any value. We eliminated useless keywords, and used the budget they had been eating to fund high-performing keywords.

Within a month, sales had grown by over 50%. After seven months, sales had more than tripled, while their cost-per-sale decreased by 78%, so they were spending about 25% less… and getting 3X the sales.

Today we’re breaking down the exact 4-step process we use, so you can start digging into your data immediately.

Let’s get into it.

It was clear from the get-go that this account had problems.

When we first saw their account, they were spending just over $50,000 a month on AdWords, but their ads were only showing about 42% of the time due to budget limitations.

Now, at first glance, you might think, Hey, they’ve got a budget problem, let’s just increase the budget!

Unfortunately, this sort of problem seems to be more the rule than the exception.

Ironically, most people know what they should be spending their budget on… and then they spend their budget somewhere else.

Unfortunately, most AdWords account managers live in constant fear of missing out on clicks and conversions. To make sure they don’t miss out on a single potential customer, they add every conceivable keyword to their account.

Such was the sad tale of this client.

To see where this client’s ad spend was really going, we went to the Keywords tab in their AdWords account and clicked on “Search Terms.”

From there, we clicked the Filter drop-down menu and clicked “Create filter.” 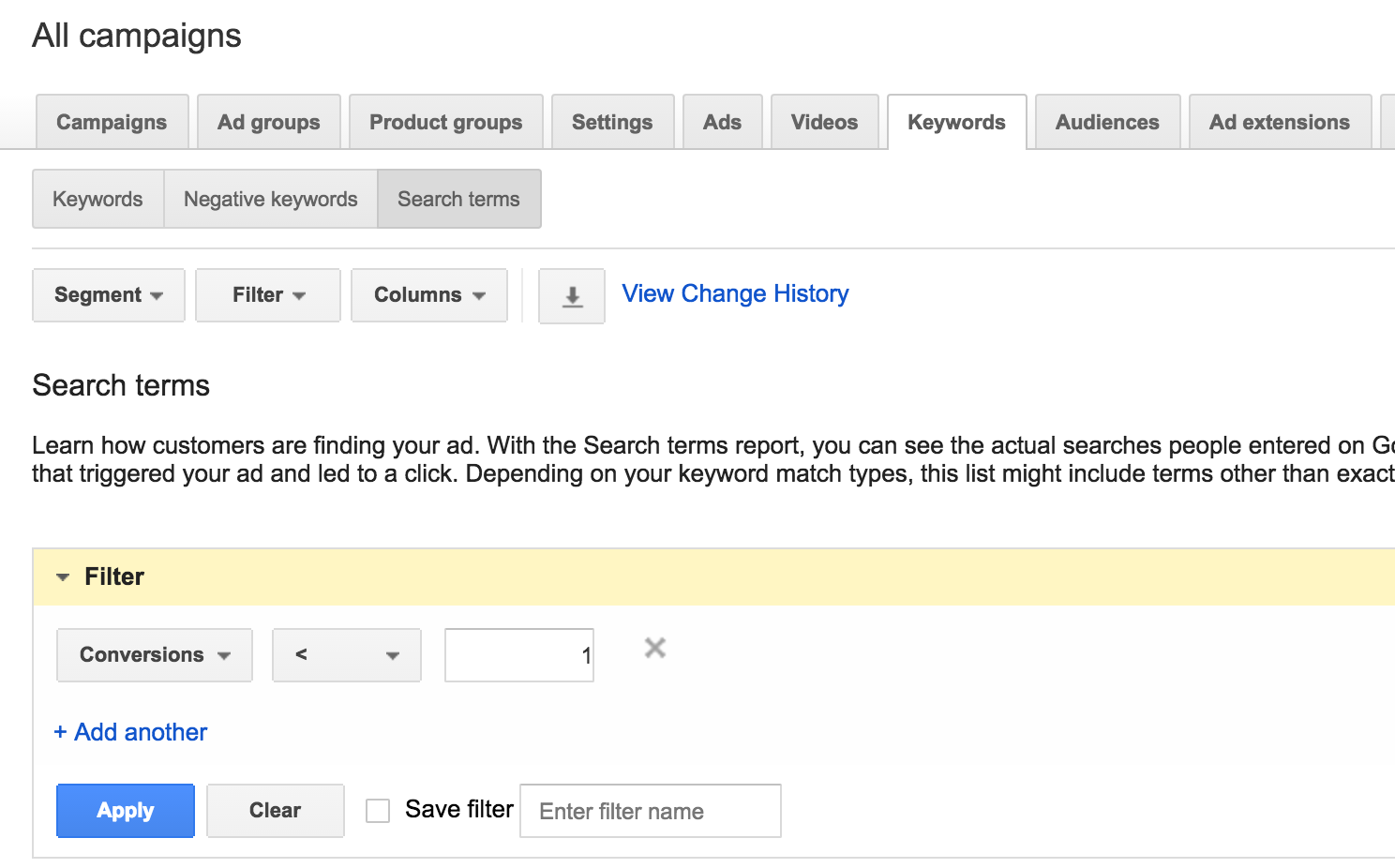 Using this filter allowed us to see exactly how much they were spending on search terms that weren’t producing conversions.

54.5% of that $50,000 budget was going towards search terms that had never produced a conversion.

Why? To answer that, we took a closer look at their keywords.

We exported their keyword list, sorted by conversions in Excel, and discovered that during the last six months, 98.9% of their 4,050 keywords had produced less than one conversion per month.

And, it got worse.

As a result, 14% of their ad spend was producing 62% of their conversions.

With most of their budget fueling those 4,005 useless keywords, their effective keywords were only triggering ads 28% of the time.

What do we know so far?

Do you see the problem here?

Thanks to the keyword bloat in this account, the good keywords weren’t able to produce at full capacity. Instead, the budget was going towards meaningless clicks.

Now, imagine what would happen if we took all of that wasted ad spend and put it towards those useful keywords…

Once we identified this client’s best keywords, we simply stopped bidding on the bad ones.

We ran a filter for all keywords with no conversions in the last three months and eliminated all the keywords on the list. Then, we looked at our search terms.

It took a few weeks to truly get the list narrowed down, but once we had worked our way through everything, we were left with 37 keywords.

Yes, you read that right: 37 keywords.

You may be thinking, Wait, weren’t there 45 effective keywords? Why didn’t they keep all 45?

Well, as it turned out, those 45 keywords were the only keywords that were producing one or more conversions per month. And of those 45 keywords, eight of them weren’t profitable enough to keep, even though they met our original performance criteria.

So, we ended up with less than 1% of the client’s original keyword list, but now those keywords had enough budget to really shine.

In a matter of days, the client’s relevant keywords were showing up for twice as many searches.

And that’s when the real fun began.

Step 4: Get More Conversions and Sales

Now, you already know how this story ends, but just to save you the trouble of scrolling back up to the top of this article, here’s a quick recap:

Simply by redirecting this client’s wasted ad spend into their more effective keywords, we tripled their sales in seven months.

While we were thrilled about this success, it hardly came as a surprise. We’ve seen these sorts of results with clients time and again.

As we reduce the amount our clients spend on their non-converting search terms and keywords, they stop paying for the wrong clicks and spend goes down.

Then, as we identify their best keywords and push more budget into those keywords, conversions go up.

And it happens in a matter of weeks.

This approach has saved and made our clients millions—what will it do for you?

If you’re like most people, succeeding on AdWords isn’t a matter of doing more in your account—you simply need to put your money where it matters.

Now, none of this means that you shouldn’t test out new ideas. But, if your account isn’t performing well, you need to get things working right before you add another keyword, ad or campaign to your account.

Eliminating keywords takes time, commitment and a leap of faith, but if you’re willing to take the plunge, your account will finally start to realize its potential.

Jacob is a passionate entrepreneur on a mission to help businesses achieve online marketing success. As the Founder & CEO of Disruptive Advertising, Jacob has created an award-winning, world-class organization that has helped over 2,000 businesses grow using pay-per-click advertising and website optimization.

Yes, You Can Be A Fractional CMO...Here's How